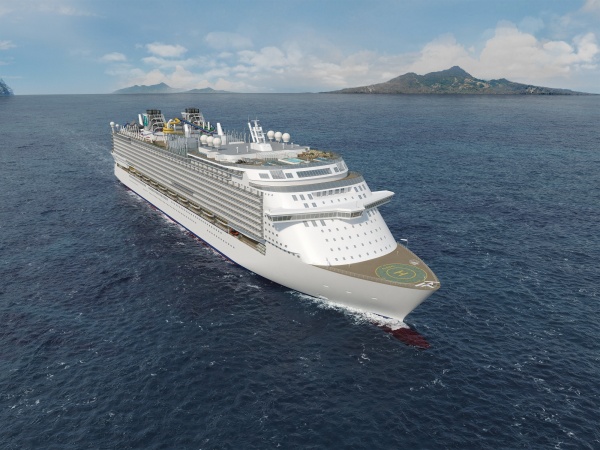 Wismar, 16. August 2019 | An international consortium led by KfW IPEX-Bank has structured a €2.6 billion financing package for two Global Class cruise ships following guarantees issued by the German Federal Government and the Federal State of Mecklenburg-Western Pomerania. This will strengthen the long-term development of MV WERFTEN Group in Mecklenburg-Western Pomerania and Germany’s status as a shipbuilding nation.

MV WERFTEN has more than doubled its workforce to about 3,000 in the last three years, creating over 1,600 additional industrial workplaces and taking on more than 300 new trainees. Its future as well as the national added value are secured in the long term with the financing package.

The Economics Minister of Mecklenburg-Western Pomerania, Harry Glawe,stated: " Genting Group is consistently following the course it has started and proving to be a reliable partner, actively fulfilling its promises. With the Global ships and other ship newbuilding projects of Genting Group, employment at MV WERFTEN is safeguarded well into the next decade. New jobs can be created, and existing jobs secured locally, with value added at the yard locations being further increased. MV WERFTEN is one of the most important employers in the region.” The German Federal Government and State of Mecklenburg-Western Pomerania are supporting the financing of the first two Global Class ships during construction with guarantees totalling €750m.

To support the long-term strategy of transforming MV WERFTEN to be one of the most modern cruise shipyards, Genting Hong Kong has invested €300m in new investment programs that have already been largely implemented. Including the purchase price of the yards and start-up losses during three years of design and development, Genting has invested around €840m in MV WERFTEN.

“In view of the shortage of shipbuilding slots for cruise ships in the next ten years, we made a conscious decision to invest in MV WERFTEN in order to receive ships for our three cruise brands in good time,” explained Tan Sri Lim, Chairman and Chief Executive Officer of Genting Hong Kong Ltd. “ We were impressed by the quality of the German shipyards’ workmanship and their network of thousands of experienced suppliers, subcontractors and workers in building cruise ships.”

KfW IPEX-Bank has worked with Genting Group for about 20 years. KfW IPEX-Bank has organised the overall financing for the Global Class ships in close cooperation with Genting since the latter’s acquisition of MV WERFTEN three years ago. “KfW IPEX-Bank's structuring expertise has also proven to be extremely valuable in this transaction . The financing means additional momentum for MV WERFTEN and the completion of the ships,” noted Chairman Tan Sri Lim Kok Thay.

Construction of the first Global Class ship is already well advanced. “W e thank the Federal Government, the State of Mecklenburg-Western Pomerania and not least KfW IPEX-Bank for their confidence in us and their support. We are highly motivated in our work on the projects,” said Peter Fetten, CEO MV WERFTEN.

About the financing package

The financing package comprises around €2.6 billion with a total investment volume of just under €3.1 billion. The structure will be backed by export credit guarantees of the Federal Republic of Germany and the Finnish export credit agency Finnvera, as well as by a guarantee from the state of Mecklenburg-Western Pomerania. It also benefits from the CIRR (Commercial Interest Reference Rate) for ships in accordance with the OECD consensus.

In addition to KfW IPEX-Bank the banking consortium includes BNP Paribas, Citibank, Crédit Agricole, Credit Suisse and DNB. A substantial portion of the loan amount will be further syndicated to more than 10 other German and international banks.

Within KfW Group, KfW IPEX-Bank is responsible for international project and export finance. It offers medium and long-term financing to support key export industries, to develop economic and social infrastructure, to fund environmental and climate protection projects and to secure the supply of raw materials. KfW IPEX-Bank operates as a legally independent group subsidiary and is represented in the most important economic and financial centres across the globe.

MV WERFTEN comprises of three shipyards in Wismar, Rostock and Stralsund in the German state of Mecklenburg-Vorpommern (MV), has a staff of 2,900 and some of the largest docks and covered fabrication facilities in Europe. The yards are located in a region with an excellent transportation and logistics infrastructure and have direct access to the Baltic Sea. Further investments in a laser thin-plate welding line, cabin manufacturing, state-of-the-art software and other automation have been made to make MV WERFTEN one of the most efficient cruise ship builders in the world.