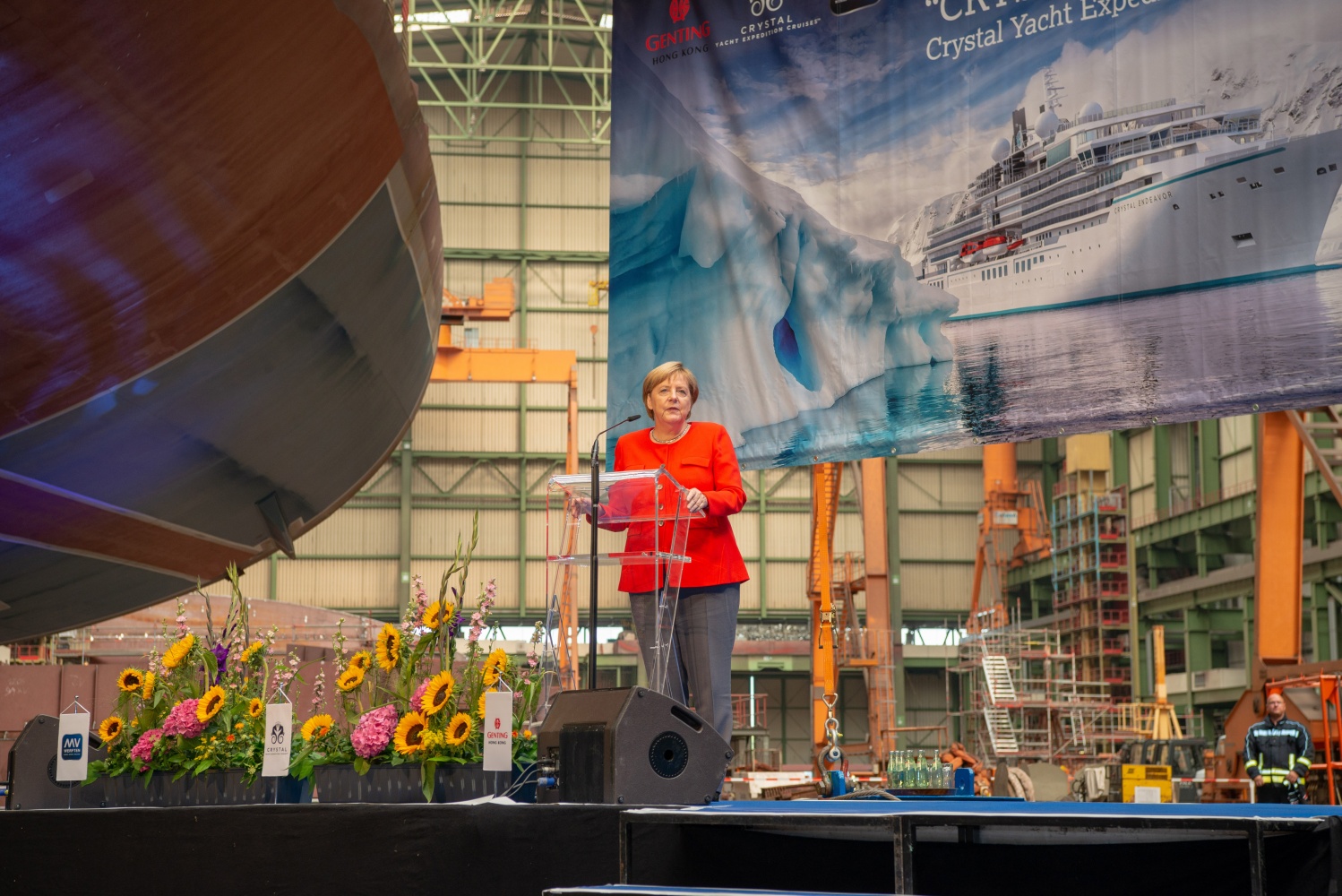 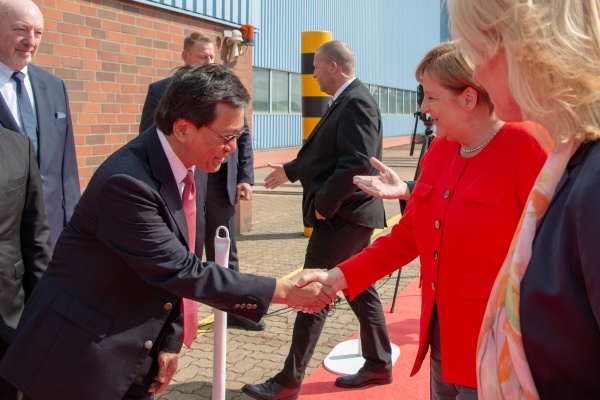 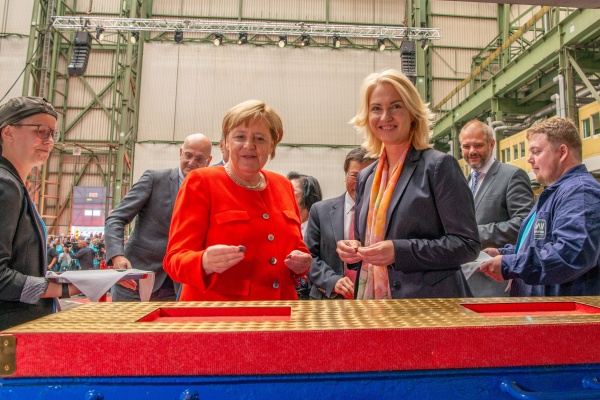 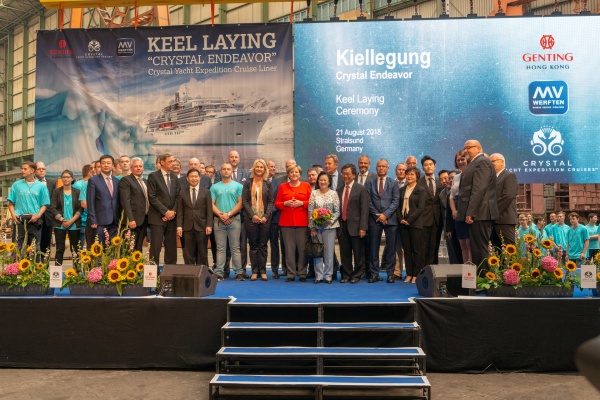 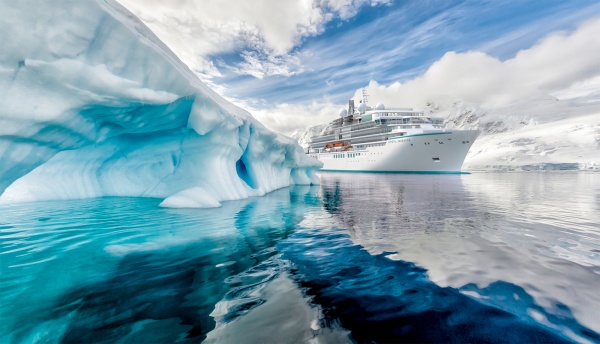 The keel of “Crystal Endeavor”, the world’s largest and most spacious polar-class expedition yacht at 20,000 gross tons with just 200 guests was laid in MV WERFTEN Stralsund shipyard today. The ceremony was attended by German Chancellor, Angela Merkel and Mecklenburg-Vorpommern’s Prime Minister, Manuela Schwesig.

“The keel laying of ‘Crystal Endeavor’ here in my political hometown of Stralsund marks a special moment for me that is doubly significant,” said Chancellor Angela Merkel. “Today, the foundation has been laid for this highly sophisticated, state-of-the-art cruise ship. But the ceremony itself, which is taking place in the lively shipyard with the participation of so many employees and trainees, also bodes well for the future of shipbuilding in the Hanseatic City of Stralsund and in Mecklenburg-Vorpommern.”

“MV WERFTEN breaks new ground with ‘Crystal Endeavor.’ We wish the company great success in building this ship and other ships of its class, the construction of which safeguards and creates jobs in the shipyards of Wismar, Stralsund, and Warnemünde,” said Prime Minister Manuela Schwesig during her address.

Once the traditional lucky coins had been put into place, the 400-ton section was lowered onto the keel blocks.

"A unique ship is being created at our Stralsund shipyard, the only one of its kind worldwide," said Tan Sri Lim Kok Thay. "We are pleased that after two years of design, we are now able to celebrate the keel laying of the 'Crystal Endeavor’, the most valuable ship to be built at the Stralsund shipyard so far. We have also invested more than 20 million Euros in the Stralsund shipyard in order to facilitate the construction of state-of-the-art cruise ships at this location."

The luxury expedition yacht will be 164 meters long with a 20,000 gross tonnage (GT) for just 200 guests. At 100 GT per guest, she has the highest space ratio for a luxury expedition ship with 100 suites between 28 and 105 square meters in size. All suites feature king-size beds, ambient lighting, walk-in closets, separate wet unit with rain showers and toilet and large private balconies.

The Endeavor Class flagship has six gourmet restaurants, a spacious spa and fitness area and a two-story enclosed aft sun deck complete with a pool that will feature panoramic views of the destinations she will visit. In addition, "Crystal Endeavor" is equipped with several features essential to a modern expedition cruise ship: state-of-the-art navigation technology, the ship's own mini-submarines, helicopters, and Zodiacs as well as designated areas for the preparation and storage of expedition equipment.

Guests will be able to cruise to the most remote corners of the world – from the tropics to the polar regions. The ship will be able to sail through medium, first-year ice because of its PC6 designation, the highest polar class rating for passenger ships. In the first six months of the inaugural season from August 2020 to January 2021, she will cruise to Japan, the Russian Far East, New Zealand, Australia and the Ross Sea of the Antarctica, the world’s largest marine park, protecting more than a million square kilometers of the Southern Ocean, where no fishing is allowed. While most Antarctica cruises start from the southern tip of Argentina, “Crystal Endeavor’s” Antarctica cruises will start and end in either New Zealand or Tasmania Australia, which allows guests to enjoy pre- and post-cruise stays in these two wonderful places.

“It is truly a thrill to mark this important milestone for ‘Crystal Endeavor’ and the entire Crystal Family, as this yacht will change the way guests can explore the world both adventurously and luxuriously,” said Tom Wolber, Crystal President and CEO. “I am honored to share this occasion with Chancellor Merkel, Tan Sri Lim Kok Thay and our special guests as well as the skilled workers of MV WERFTEN who are building this game-changing ship.”

"The construction of this sophisticated ship is progressing as planned," said Peter Fetten, CEO of MV WERFTEN. "Around 500 employees will be involved in the construction of 'Crystal Endeavor' at the Stralsund site. In addition, around 500 skilled subcontractors will be brought in from outside of the company – creating sustainable value for the region."
The first steel cut for "Crystal Endeavor" took place in January. The delivery is scheduled for the end of 2019/early 2020 for a series of charters and “Crystal Endeavor’s” inaugural season will start after the Tokyo Olympics in August 2020.