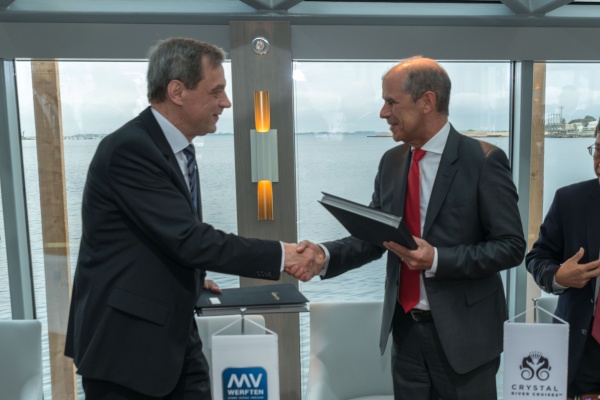 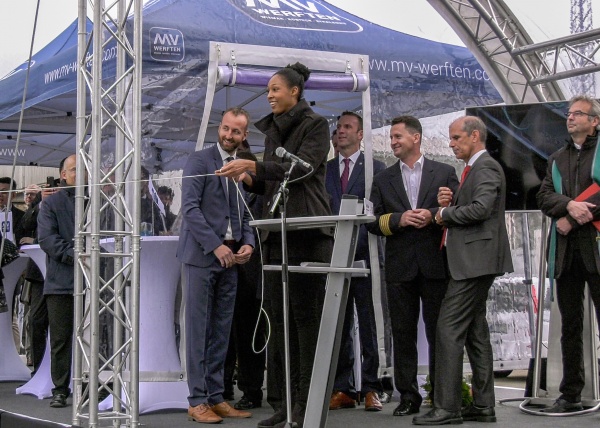 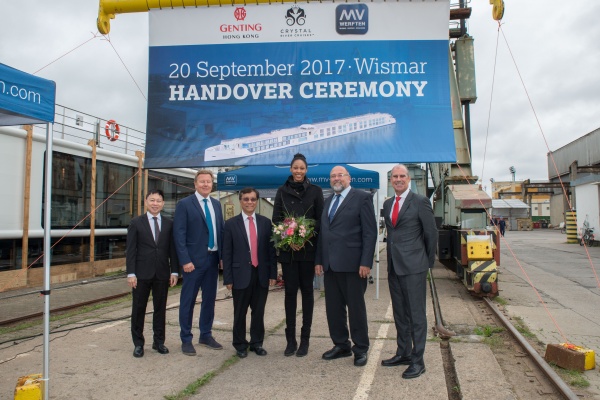 “Crystal Mahler”, the second of four Rhine Class river ships, was ceremoniously handed over to Crystal River Cruises in Wismar. Afterwards, the luxury river vessel was christened in the shipyard.

Wismar, 20. September 2017 | Today, just a few short weeks after delivery of the “Crystal Bach”, MV WERFTEN handed over the “Crystal Mahler”, the second of four Rhine Class ships, to the client, Crystal River Cruises, The World’s Most Luxurious River Cruise Line. After the ceremonial change of flags, the ship was christened at the outfitting quay of MV WERFTEN in Wismar.

Like its sister vessel, the 135-metre long and 11.4-metre wide river cruise ship was specifically designed for exploring Europe’s beautiful rivers. It complies with the highest safety and navigation standards, including a permanently staffed, state-of-the-art navigation system as well as Azimuth thrusters for optimum maneuverability. The elegant design of this luxury ship resembles that of private yachts. The interior of the “Crystal Mahler” boasts light and airy public areas with floor-to-ceiling glass walls as well as spacious suites with horizontal sliding windows. Other on-board facilities include three gourmet restaurants, a spacious spa and fitness area and a swimming pool with a glass roof.

The ship carries just 110 guests in 55 all-balcony suites along the Rhine, Main and Danube Rivers through Germany, the Netherlands, Austria and Hungary, amongst other countries. Sixty-eight crew members guarantee the award-winning Crystal Cruises service as found on other ships in the fleet.

“A new milestone has been reached with the handing over of the ‘Crystal Mahler’ to Crystal River Cruises: half of the Rhine Class river cruisers have now been delivered”, said Jarmo Laakso, CEO of MV WERFTEN, during the handover. “I would like to thank all of the employees and project partners for their commitment and this tremendous achievement and most especially our parent company Genting Hong Kong for this trust in us.”

“We are incredibly pleased to be collaborating with the experts at MV WERFTEN, and thank them for their attention to detail and delivering the kind of innovative and stylish vessels that embody Crystal’s vision of offering travelers an unmatched experience along Europe’s rivers,” said Crystal President and CEO Tom Wolber.

The celebration continued with a traditional christening at the shipyard. Lauren Barfield, a U.S. citizen who plays for SSC Palmberg Schwerin, the reigning German volleyball champions, served as Godmother to the ship. MV WERFTEN has sponsored her team since March 2017. The athlete blessed the ship with a traditional blessing before the champagne bottle burst impressively against the side of the ship.

After delivery of “Crystal Mahler”, a further seven ships, to be delivered by 2021, are on order from the shipbuilding group. Numbers three and four of the Rhine-Class ships, “Crystal Debussy” and “Crystal Ravel” have been under construction since January and will be delivered in 2018. In the spring of 2018, production will begin on the first of three Endeavor Class mega yachts as well as the first of two ships of the Global Class for Star Cruises.