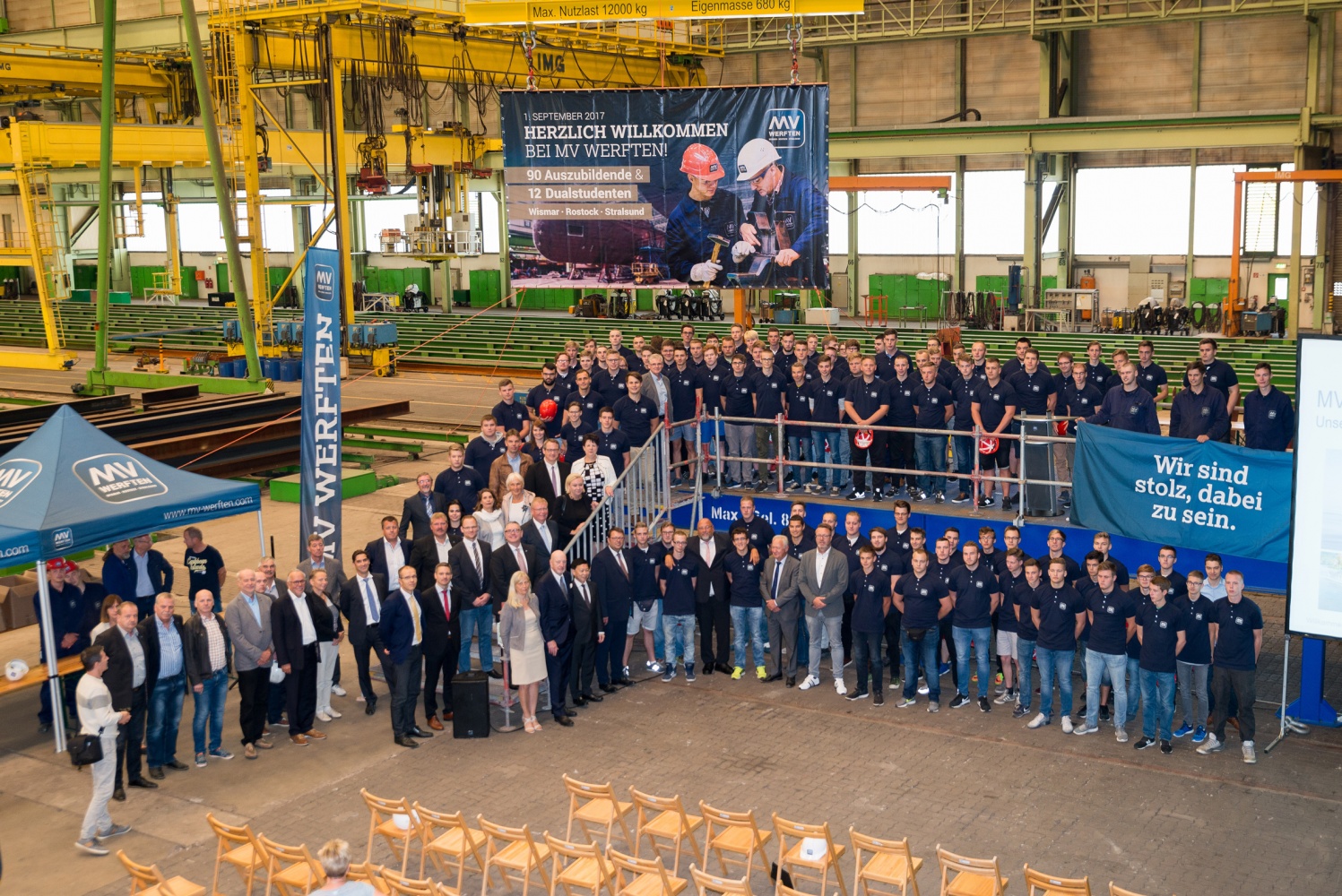 90 apprentices and 12 students taking sandwich degree courses will be starting their professional lives with the shipbuilding group on 1 September. With 102 new recruits, MV WERFTEN will be taking on more young people in the new training year than any other company in Mecklenburg-Vorpommern.

Wismar, 01. September 2017 | In an official ceremony held in Wismar today, MV WERFTEN welcomed 102 new recruits to the maritime industry. 90 apprentices in five different professions and 12 students taking sandwich degree courses were given a warm welcome by the company management, works councils and training supervisors, set against the impressive backdrop of the company’s shipbuilding hall.

“Today is a very special day for us – we are taking on over 100 new recruits in one fell swoop and are setting course together for a successful career path over the coming years,” said Holger Tepper, COO of MV WERFTEN.

In November 2016, MV WERFTEN launched the campaign “90 apprentices by 1.9.2017” – and it has been a success. 30 apprentices each have been taken on in the shipyards in Wismar, Rostock and Stralsund. Companywide, 32 plant mechanics, 29 construction mechanics, 15 production mechanics, nine mechatronics engineers and five industrial electricians have now commenced their training. Twelve students taking sandwich degree courses specialising in mechanical engineering, four at each site, will be doing the practical part of their courses at MV WERFTEN, with the theoretical part taking place either at the University of Wismar or, for the first time, at the University of Stralsund. This type of degree is concluded after eight or nine semesters with the Bachelor of Engineering.

With these 102 new recruits, MV WERFTEN is taking on more young people in the new training year than any other company in the state. The company currently has a total of 194 future skilled workers in training – 169 apprentices in five different professions and 25 students on sandwich degree courses specialising in mechanical engineering. The three shipyards have regularly received awards from the federal state’s Chambers of Industry and Commerce as “TOP training companies” for the high quality of their training, the most recent of these having been received in the spring of 2017.

“In the competition for the best skilled staff, training carried out within your own company plays a key role,” said Jarmo Laakso, CEO of MV WERFTEN. “This is why we attach great importance to having a forward-looking and diverse apprenticeship programme and make long term plans with our trainees.”

The career prospects for these future skilled workers are very good – the shipbuilding group has eight ships in their order books for the next five years. One river cruise ship was delivered in August and the second of these “Rhine” class ships will follow in a few weeks’ time, with the third and fourth currently under construction and due for delivery in the spring of 2018. Production on the first “Endeavour” expedition yacht will start in the spring of 2018, as well as on ships of the “Global” class, the biggest cruise ships ever to be built in Germany. Applications for trainee positions for 2018 are already open.